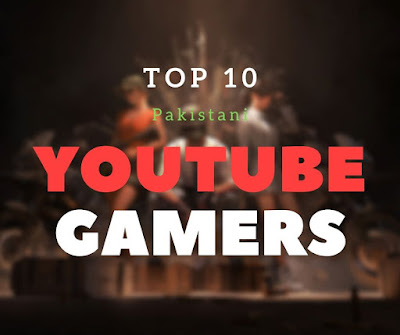 Top 10 Best YouTube Gamers in Pakistan
During recent years, gaming has become somewhat of a worldwide sensation. All kinds of people from every culture, continent, and country are taking part in this. And with the increasing popularity of YouTube, gaming has taken an international turn and has transitioned into an era of online streaming and sharing. Pakistani talent has accepted this change with an open heart and has made its mark in the YouTube gaming community. Following are some of the most famous and subscribed YouTube gaming channels that belong to Pakistani YouTubers:

A new rising channel in the gaming community in Pakistan is ARF the Gamer. ARF has been producing content for quite a while now after joining YouTube in 2016. But has gained huge success this year. This channel produces amazing quality content and has 24.1k subscribers. It has started to build a good audience for itself and it has now reached about 1.26M views on its videos. Most of its content is based on GTA V game mods and got an effective review of its different combinations. Several walkthrough videos are also uploaded regularly and are very much liked by the audience.

Gaining itself popularity in the gaming community of Pakistan is a relatively new gamer known as Ryz3n. Despite having a cool name, Ryz3n also has an amazing repertoire of quality content. Videos are posted regularly every week and the fans also watch the stream sometimes as well. The channel was created in 2012 but has received wide appreciation in the current year due to its new PUBG content. It has about 24.26k subscribers and has received a total of 6.98M views worldwide. Considering the continuous success, it is expected to cross the threshold of a 100k soon.

A very personalized name for a gaming channel, but a highly successful one in Pakistan is Sanwal Gaming. As the name suggests, the gamer Sanwal joined the YouTube gaming community in 2017 and has received a very successful response from the people in a very short time. Sanwal uploads different tips, tricks and walkthrough related videos on his channel and his vision is focused only on Free Fire yet. As of now, the channel has about 89.65k subscribers and over 3 million views worldwide.

One of the most favorite and highly watched YouTube gaming channel in Pakistan is RAGNAR Live Gaming. The channel has been thriving since 2013 and has received continuous support and encouragement for its audience. It has a massive fan base of about 109k subscribers and several millions of views on its content. The channel produces videos related to PUBG and is also famous for its thrilling and entertaining live stream. With the current projections, this channel is believed to succeed further soon.

Just like its name, this channel is a Predator when it comes to hunting for success in PUBG as well as on YouTube. The channel has received a lot of appreciation from the people and has built a solid fan base of 184.42k subscribers. Mostly focused on PUBG related content, Predator uploads several challenge videos on the channel and amuses the people with funny and entertaining commentary as well. Its videos have received 11.28 million views worldwide and been ranked on the 6th spot on the list.

Another Pakistani gaming channel devoted strongly to PUBG is the Star ANONYMOUS. This channel is very successful and has been in the community for about 2 years. It had its ups and downs but now after a continuous hard work and struggle, Star ANONYMOUS has gained over 200k subscribers and is one of the most prominent YouTube gaming channels in Pakistan. The content is very entertaining and engages the audience with tips and tutorials related to the game. As a result, the channel has received 1.2million views worldwide and is expected to get even bigger shortly.

One of the most diverse YouTube gaming channels in Pakistan is Azeem Asghar GamerPK. The channel features content regarding several games like GTA V, PUBG and Eight Ball Pool, etc.  The channel started in 2016 and since then has received much success in the form of 13.94 million views worldwide over its videos. More than 235k people have subscribed to the channel and like the content very much.

Entering the top 3 on the list with one of the highly ranked gaming channel in Pakistan is known as Gamming with K. The channel has several streams and tips regarding 8 ball pool, Fortnite, and GTA V. It has received much success since 2017 and has 244.83K subscribers and 23.15 million views on its videos.

One of the most influential Pakistani YouTubers of this decade is Ducky Bhai. He has gained a massive fan following during the past few years and posts a variety of content on his channel Ducky Bhai. But this channel of his, known as Ducky Extra is solely based on gaming content and has amazing reviews from the audience. It has nearly 518k subscribers and a total of nearly 25 million views worldwide. The channel has been around for only 2 years and according to its current stats it is going to excel even further in the future.

Coming to the reigning champion of the list is the channel named Funta Kids. The channel is fairly new and has received huge success in a small amount of time. It produces walkthroughs and QNA videos for the game GRANNY. The channel is highly liked and supported and has more than 600k subscribers. The audience of this channel is unlike other channels and is fairly diverse. It is the aspect of humor and entertainment in the videos that has acquired more than 5 million views to its videos in a very short amount of time.